Published Oct 19, 2015
Born in a little Bavarian village as Traudi Schönberger, this fascinating lady went to discover the world and became a top journalist for the German teen magazine BRAVO and other big papers.
Frances Schoenberger has interviewed them all, and the stars seem to have felt very comfortable with her, probably because she was interested in them as a person and not their role.
David Bowie spent a platonic night with her, John Lennon felt more like chatting on his bed than doing a serious interview, Larry Hagman let her do an exceptional home story, Arnold Schwarzenegger agreed to be the godfather of her daughter Daisy, and on and on.
Well-known to every German artist who has some connection to Hollywood, she has been called “Germany’s First Lady of Hollywood”.

Published on Apr 6, 2015
Screenwriters get Personal, Episode No. 10
What many people don’t know: Mark Tapio Kines is actually the first filmmaker to ever crowdfund a movie. Some sources say the birth of crowdfunding took place in Europe, in 2004. Wrong! Mark’s first feature was crowdfunded in 1998. Listen to what else this down-to-earth film expert has to say.

In the ninth episode, Hans-Peter’s guest is Sarah Rosenkrantz. Born in 1989 in New London, Connecticut, Sarah went to live with her aunt and uncle in L.A. when she was 15 (with the permission of her wonderful and nurturing parents). Her aunt and uncle are independent filmmakers and took Sarah on a physical and psychological journey through all sorts of artistic landscapes.No wonder, Sarah, now 24, is already writing and directing her first feature film. Its title is “All is Forgiven” (http://allisforgivenmovie.com), and Fox TV picked it as one of the projects to promote on “The Crowdfunder Show”.

Hear about Sarah’s exciting life and her encouraging wisdom she gathered in that short period of time!

In the eighth episode, Hans-Peter’s guest is Korinna Sehringer, a Swiss compatriot. Korinna is the director and producer of the film “Shouting Secrets” (http://www.shoutingsecretsmovie.com) which was finished in 2011 and won over 25 awards worldwide.
Korinna Sehringer tells the audience how she struggled on the way to fulfilling the big dream of a little Swiss girl—making movies in Hollywood.

In the seventh episode, Hans-Peter’s guest is Ashley Scott Meyers (http://www.sellingyourscreenplay.com). Ashley is a screenwriter with several produced scripts, and he helps other screenwriters to find marketable concepts and sell their screenplays.
His story on how he became a writer is quite unique, and so is his email and fax blast service; Ashley lets other screenwriters use his database of producers, managers and agents that he has carefully built during the years.

In the sixth episode, his guest is Jen Grisanti (http://www.jengrisanti.com). Jen Grisanti is a Story Consultant, Independent Producer, Writing Instructor for NBC’s Writers on the Verge, Blogger for The Huffington Post and author of the books, Story Line: Finding the Gold In Your Life Story, TV Writing Tool Kit and Change Your Story, Change Your Life: A Path To Success.
Jen is also famous for her podcast “Storywise”, available on iTunes, where she interviews successful writers. Jen Grisanti considers herself a spiritual person, and she radiates this attitude, not only in this interview, but also in the way she treats her students.

In the fifth episode, his guest is Laurie Lamson, co-editor of the famous “Now Write!” book series. Besides being a book editor, Laurie also writes directs and produces commercials, music videos, short films, and surely someday a full-length feature film.
Laurie Lamson is also a medical intuitive and energy healer, and she speaks openly about her spiritual world view.

In the fourth episode, his guest is Dan Watanabe, a professor at Los Angeles Valley College. Having been a development executive for many years, Dan has an incredible knowledge of the industry, and an unsurpassed passion for story. No wonder he is one of the most popular teachers in town!

In the third episode, his guest is Gene del Vecchio, a branding and advertising expert, audience researcher, and author of the book “Creating Blockbusters” (http://www.creatingblockbusters.com). Gene’s input is scientifically based and will benefit screenwriters and studio executives alike.

In the second episode, HPZ’s guest is Christine Conradt (http://www.christineconradt.com), a passionate and very productive screenwriter, and a household name at the Lifetime Movie Network (LMN).

In this first episode, his guest is John Robert Marlow (http://www.makeyourstoryamovie.com), novelist, screenwriter, and adaptation specialist. His book “Make your Story a Movie — Adapting your Book or Idea for Hollywood” can be ordered here: http://amzn.to/TTaoXP
European customers order here: http://amzn.to/QbDGSG

Buy this book on Amazon! 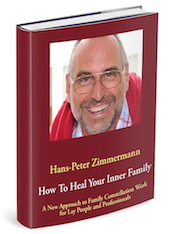 How to Heal your Inner Family represents a novel approach in systemic therapy: while most systemic therapists derive from a specific conflict to solve it using systemic techniques, Hans-Peter Zimmermann’s “six systemic checks” are a kind of mental spring cleaning, which one can perform on each client (or even should).
The practical index also provides quick access to all kinds of possible systemic situations and their solutions.

“I love your book and I got so much healing out of it. Thank you!”
Laurie Lamson, editor of the “Now Write” book series.